The Getae (Dacians) and other peoples of the Danube basin developed a fascinating religious cult some time between the 1st and 3rdC CE whose imagery seems to have been a syncresis of the worship of Epona and that of the ‘Thracian Hero’ or Sabazios. The reason we know about it is from a collection of small lead plaques and occasional stone stelae  depicting cult images. After Trajan conquered the Dacians at the start of the 2ndC CE, his admiration for them as a military fighting force and organised society led to a rapid assimilation of them into the Empire and offered Dacian warriors and nobility an opportunity to serve with honour in the Roman army – particularly the cavalry. Dacians, Dalmatians, Moesians, Sarmatians and their Thracian cousins and neighbours had a great equestrian tradition and became key recruits to Rome’s elite mounted fighting forces. As such their native religious cults often appear to have involved the horse – in particular the mounted ‘Thracian Hero’ and the more northerly ‘Danubian Horsemen’ imagery come to mind. There was also the ‘celtic’ goddess Epona, whose idea and imagery was popular not only in the Balkans and down the Danube, but among the ‘Germanic’ peoples who existed along and around the river Rhine in Germania, and even in Gaul and Rome itself.

The phenomenon referred to as the ‘Danubian Horsemen’ cult is perhaps of greatest interest, as appears to show elements of syncretism uniting the more western or Celtic ‘Epona’ cult and the more eastern Thracian ‘Horseman’ cult. The lead plaques which are the most common source of the Danubian imagery are typically quite small – they’d fit in the palm of your hand – and were obviously devotional objects of some kind. 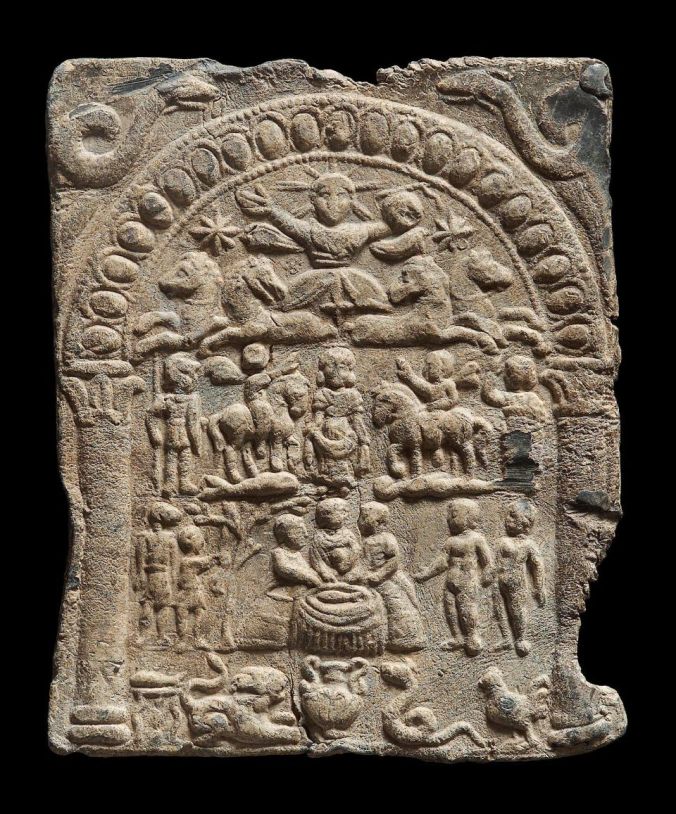 An exquisite example of a plaque depicting the ‘Danubian Horsemen’ and their central goddess… seemingly a version of Epona.

Apart from the central goddess and her two (or four) horses – an image familiar from the Epona cult – they typically show aspects of the chthonic imagery associated with the Thracian/Phrygian deity Sabazios, and Delphic Apollo: namely the serpent or dragon. The dragon was an important and iconic aspect of Dacian symbolism, as evidenced by their legendary ‘Draco’ banners as depicted on Trajan’s column in Rome. The other essential piece of imagery associated with the cult is the sacrificial fish which appears in the image above in three forms: under the hooves of one of the horses, on the ‘altar’ surrounded by three women, and upon a sacral tripod. 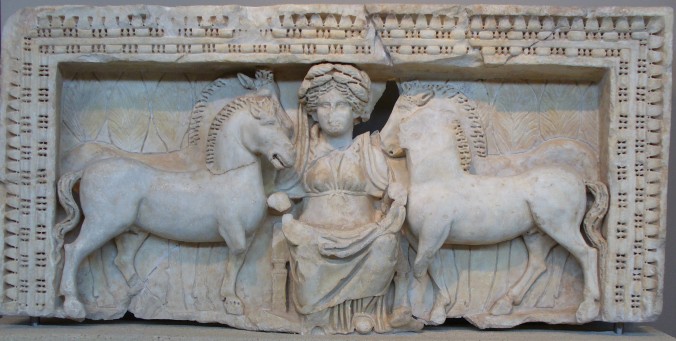 The usual appellation of  ‘Danubian Horsemen’ cult actually removes the real central figure from the religion, which is actually the seated goddess. Whereas the ‘Thracian Horseman’ images usually represent the solitary hero on his horse vanquishing a boar or similar beast, here there are two riders – somewhat akin to the Greek Dioskoroi, the famed equestrian brothers of ancient Greek religion, one of whom was mortal and one of whom was divine. Such imagery is an important aspect of the ‘divine hero’ cults which drove societies in this age: it was important that humans could aspire to the divine through identity (tribal or spiritual) with such ideas. Although Hercules was a popular image in this age, his non-equestrian nature would not have appealed so much to warriors of the Danubian region…

By the ‘Dioskorian’ interpretation of this imagery, the goddess seated between the two horsemen would have been seen as an intercessor between the divine and the mortal and therefore a goddess of death and war. The Dioskouroi – Kastor/Castor and Polydeukes/Pollux themselves represented the combination of immortal with mortal – a fact as important to their cult as their association with horses. By common European norms of the day, the owners and riders of horses held a superior cultural and social status – a feature which has endured down to the modern day. The goddess who controls horses was therefore the goddess with power over human society’s elites – perhaps explaining the importance of ‘Epona’. The ‘fertility’ aspect of Epona has often been commented on – perhaps on account of this cultural power-relationship of humans with horses. The imagery of serpents associated with the Sabazios and Danubian cults reflects the power of decay to promote fertility – an aspect reflecting the ideas of kingship and ambition which lead to wars, which in turn led to death and regeneration in Europe’s ancient societies.

Writing in the 1stC BCE, Diodorus of Sicily had this to say about the Celts of Atlantic Europe (which if he is borrowing from Herodotus :

“…The Keltoi  who dwell along the ocean venerate the Dioskoroi above any of the gods, since they have a tradition handed down from ancient times that these gods appeared among them coming from the ocean…” Library of History 4. 56. 4 (trans. Oldfather)

This may explain the fish in the ‘Danubian Horsemen’ cult imagery – the Dioskouroi were also favourites among Greek and Roman fishermen and mariners, and the Danube basin was famously associated with fisheries and river trade as well as its cavalry traditions, and the river was well-stocked with fish in ancient times, including the freshwater Danube Salmon (Hucho hucho) which can grow to a huge size – as big as a man! The giant fish being trampled by the hooves of the leftmost rider on the ‘Danubian’ plaque may well be one of these. It seems a good fisherman’s alternative to the ‘Thracian Horseman’, typically portrayed trampling his porcine or leonine prey.

So why Epona and what does she signify?

The Danubian ‘Epona’ is depicted making contact with the horses of the two mounted heros, and occupies the central upper part of the plaques’ imagery associated by the usual interpretation with the spiritual or otherworld realms.  In the plaque depicted above, under the arch (which depicts the vault of the heavens) is another figure who appears to be driving a quadriga chariot yoked to four horses and with the rays of the sun coming from his head – evidently this is Helios-Apollo. Other similar plaques depict Sol and Luna (or Helios-Apollo and Artemis-Hecate-Selene, interchangeably Sabazios and Bendis) in the same position. This syncretic imagery seems to have been shared with the late classical Sabazios and Mithras cults of Thracia and Phrygia which subsequently spread throughout the Roman empire. For the solar and lunar gods to be depicted above ‘Epona’ suggests to me that the events in the drama of her mysteries in this cult happened at the gateway to the otherworld, and places this ‘Epona’ as a receiver of the dead. Not a ‘goddess of horses’… She may have been viewed as this by Romans who absorbed Epona’s cult (see: Juvenal, Satires VIII), but they also popularised the Dioscuri as gods of horses! This was evidently a mystery cult whose outward façade hid higher truths.

Some of the Danubian plaques depict Epona interacting with the horses while simultaneously cutting/sacrificing the fish on a tripod altar, sometimes a pedestal altar. Others, like the one above in particular, leave this to a trio of apparently female figures. The image in fact looks like a depiction of Shakespeare’s ‘weird sisters’ around their cauldron, although it may be a pedestal altar. This may be a depiction of a cult practice, but it might equally portray the typically Celtic ‘triple’ aspect of the divinity above, which imagery seems often to have been borrowed by the Greeks and Romans. The left-most figure is dumpy and matronly, the right-most seems lithe and young, the one in the middle is difficult to age unfortunately, but I shouldn’t be surprised if she was supposed to be a crone…

7 thoughts on “Epona and the cult of the Danubian Horsemen”