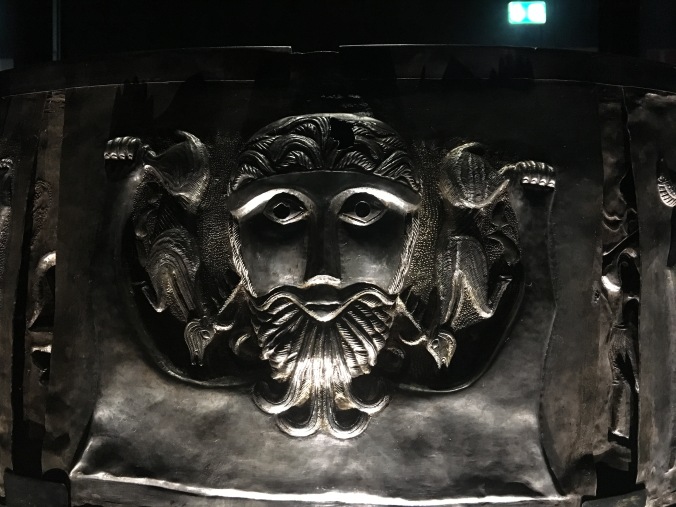 Followers of the Atlantic Religion blog will possibly be aware that I have made allusions to my belief that the pagan faith-ideologies of ancient northern Europe stem from a common unified root-system buried in the mists of the Neolithic and Bronze Age archaeological periods (roughly 4000-1000 BC). This underwent a protracted process of differentiation as a result of the trans-European religio-militarist cultures (Greek, Celtic, Roman) of the late Bronze Age and Iron Age periods (roughly 1000BC-400AD).

These complex influences have resulted in modern historians ascribing an artificial and arbitrary division of northern European paleo-religious culture into ‘Celtic’ and ‘Germanic’. Reasons for this division as it stands today can be ascribed to the following factors:

(i) Linguistic differences between Germanic and Celtic cultures which caused Greco-Roman authors to categorise them as different.

(ii) Reliance upon limited and highly-biased contemporary (Greek and Roman) written source-materials on north European Iron-Age religion. Greco-Roman authors tended to split peoples up into ‘civilised’ peoples, worthy of understanding, and ‘barbarians’ – the unconquered fear-inducing rabble. The latter category, were only generally to be understood so far as they interfaced with civilised cultures, which between the 4th century BC and the 4th century AD was limited to portraying their fierce unruliness in need of taming, and their unsophisticated inferiority requiring civilisation.

There is a pervasive fallacy – committed initially by the ancient Greeks and Romans and still prevalent today – that ‘barbarous’ culture is static, unchanging and timelessly primitive and lacking sophistication until exposed to ‘civilization’

(iii) Biased, incorrect or acontextual information provided in early to late medieval christian and ‘secular’ literature. A 3rd century Christian within the Roman empire was an edgy revolutionary in a new-order of portable enlightenment not tied to any mystery cult. To them establishment paganism was meaningless and archaic and easily dismissed! LIkewise, an 8th century Christian writing about contemporary Nordic pagan practices of which he is in horror is hardly going to be sympathetic, just as an 8th century Irish hagiographer is hardly going to treat a history of his religion’s triumph over that of the past with true sympathy to the ‘defeated’ religion.

(iv) Historical confirmation bias: The 13th century AD Eddas from Iceland were written by authors in a relatively newly-Christianized culture, for a contemporary audience versed in the popular and prevalent European ‘Romance’ literature, which dealt specifically with christianized pagan themes and heroic sagas. The same can be applied to Irish literature during the same period. These were later ‘recovered’ and popularised during the ‘Enlightenment’ period when European cultures (such as Denmark, Britain and Ireland) sought prestige in their own ancient pagan past as well as their own Christian present, and were treated officially as having historic as well as literary merit.

(v) There was a relatively early death of Iron Age ‘Celtic’ religious culture as it was largely subsumed into Greco-Roman civic, pagan and Christian cultures by the 5th century AD. In contrast, the Nordic and Baltic pagan cultures would continue to evolve for nearly another 1000 years before fading from common practice, with enclaves still identifiable in parts of Lithuania, Estonia etc as late as the 16th century, if not longer. This long gulf of time has left us struggling to see any similarity between 13th century Icelandic descriptions of pagan mythology with that offered about ‘Celtic’ religion in scanty reports of ancient Greeks and Romans a thousand years earlier. There has been a constructive tendency to use scanty intermediary evidence from Jordanes about Gothic religion, from Bede and contemporaries about Anglo-Saxon religion in the 7th century, and undetailed but supportive comments from Beowulf and Saxo Grammaticus etc, as well as more modern archaeological finds to support the narrative of the Eddas as representing an ancient ‘Germanic’ continuum, but this is no more reliable than Homer’s speculations about what was actually believed in Mycenaean Greece 1000 years before his writing of the Iliad. Stating that Germanic Europeans worshipped different gods in a different way to Celtic Europeans is about as useful and nonsensical as claiming ‘the Romans worshipped Jupiter, Mars, Minerva and Juno’! You have to qualify that with a time-period, and be more nuanced: ‘People of Rome in the 4th century BC followed the state-religion in worshipping Jupiter, Mars, Minerva and Juno’ would be more specific. It is quite possible that ‘Celts’ of the 3rd century BC were worshipping a raging, wise, possibly one-eyed warrior god as they conquered and looted the great oracle at Delphi. Dionysus, Belinus and Wotan have many similarities, save for their names.

(vi) Archaeology has tended to reinforce perceived differences between ‘Celtic’ and ‘Germanic’ by relying upon the forgoing preconceptions based upon mythological and historical literature for its own interpretations, although modern thinking is beginning to change this situation. What is apparent however, is that increasing accrual of material evidence coupled with progressive sophistication in archaeological techniques is forcing us to re-examine historical interpretations. We know that peoples in Bronze Age Denmark were performing similar ‘religious’ behaviors to those of Bronze Age Ireland, Holland, Spain, France, Germany and Britain, and that these were connected somehow to material cultures seen in Mycenaean Greece. Many of the material and behavioral cultural indicators of religion – deliberate submersion of objects in water and other ‘votive’ and inhumation practices continued through into the era of the eventual Romanisation of most ‘Celtic’ lands, many of which come under the modern conception of ‘Germanic’ or ‘Nordic’. Why, for instance, was the archetypally-‘Celtic’ Gundestrup Cauldron discovered deliberately concealed in a Danish bog? Even ignoring the fact that its workmanship is typically Thracian – from the southern Balkans, modern Bulgaria – this tells of a more widespread shared belief-system.

Contemporary dissatisfaction with the portable religious franchises of Judaeo-Christian-Islamic thinking, and the deeply divisive, unsettling and damaging effects these have been having on the world of late, make the drive to rediscover the original indigenous European/Eurasian (Indo-European) philosophical and religious systems all that more pressing.