The folklore and fairy-tales of Ireland, Scotland and the Isle of Man maintain a memory of an important female character whose prominence and mystery outstrips all others of these regions. Known as the ‘Cailleach’ (pron. kal-yack), her mythology portrayed her as an ancient forebear of humanity – perhaps so old that her body, her existence, her very essence appears as one with the landscape, which she is credited with creating. On account of her age she is ascribed great knowledge of things past, but also in many traditions claims knowledge of what will come to pass in the future. She is a mistress of herds, an industrious worker, but somewhat reclusive and prone to be found in wild, out-of-the-way places – particularly mountain-tops. She clearly relies on no male partner, although in some tales she is associated with one – albeit in a somehow estranged manner. Students of ancient European paganism might well recognise in her the image of whom the Romans referred to as Magna Mater – the Great Goddess from Anatolia’s Phrygian highlands, known as Cybele who was identical with the Greek ‘Mother of the Gods’, Rhea, wife of old Kronos himself. 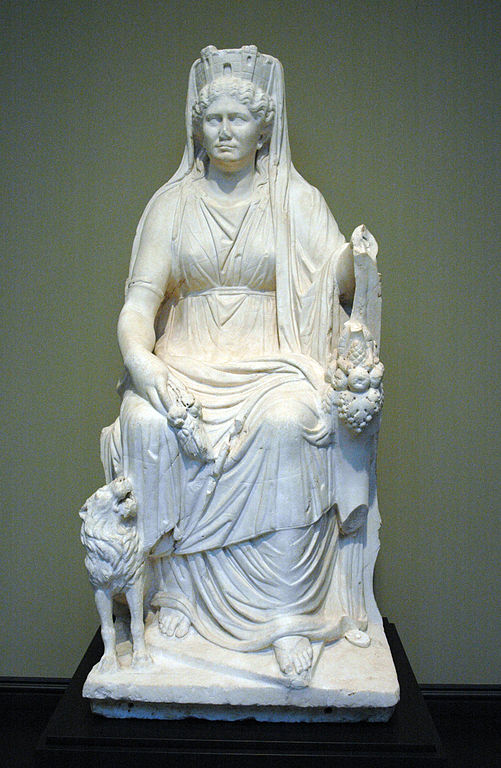 The Phrygian ‘Great Goddess’ was said to have originated among the Thracians who, according to Herodotus,  were once known as Bryges and crossed over into Asia Minor to occupy its central uplands. She was said in some sources to be the mother of the god Sabazios, the ‘wild horseman’ who became identified with the Greek Dionysos. It is of interest that the sacred rites of both Phrygian Cybele (who remained identified in Thracia as both Cottys (‘the sitter’?) and Bendis) and the Greek Dionysos consisted of wild orgia involving ecstatic dances, processions, the use of intoxicants and sacred rhythmic music involving drums, cymbals, flutes and horns. Participants emphasised the mysteries of nature’s chthonic fertility and recurring constancy. Whereas the Dionysia were typically led by female celebrants, the rites of Cybele were led by a priesthood of castrated eunuchs who took on the roles of women. In spite of this, the similarities were striking and point towards a common older religion, whose origins lay as much within Europe as they did in Indo-European Asia.

Cybele was particularly associated with cult centres in the Anatolian highlands – her shrines (like those of the Persians, Medes and many Celtic peoples) occurring on mountains. The same was true of Rhea, whose main shrine on Crete was situated high on Mount Ida: it was here she was supposed to have hidden the infant Zeus from his cannibalistic father Kronos. The other Mount Ida – in the Phrygian Troad – was sacred to Cybele. Other oracle sites from Greece to Asia Minor were located at high altitude – Delphi being a notable and famous example, which was apparently an oracle to Gaia/Ge before it became sacred to the ‘divine son of light’, Apollo. Mount Fengari on the island of Samothrace (‘Samos of Thrace’) was another site for the oracular cult of the Great Mother of the Gods, whereas on the island of Samos off the Lydian-Ionian coast of Asia Minor, the cult of Hera (a linguistic metathesis of ‘Rhea’) held sway.

When Rome officially adopted the cult of Cybele towards the end of the Punic Wars (3rdC BCE) it was at the behest of the oracular cult of the Sibylline priestesses who appear to have functioned as part of a network of Apollonian oracles across the ancient Mediterranean world, extending from Ionia in western Asia Minor. These appear to have had more ancient links with the worship of the Great Goddess than history generally leads us to believe – perhaps on account of the identity between the ever-youthful Apollo, and Cybele’s divine consort, Attis. The phonetic similarities of the words ‘Sybil’ (originally Greek) and ‘Cybele’ point towards a more ancient link, that the Roman Republic’s dominant and Hellenophile Patrician statesmen perhaps believed they needed to remind their peoples of during the crisis. Presumably, there was a connection between the ecstatic celebratory rites of Cybele and the ecstatic visionary states of the ancient Sybils, although the secret and initiatory aspects of the cults of these gods must leave much open to speculation.

Returning to the northwest shores of Atlantic Europe, is seems quite apparent that there must be some connection between Cybele/Rhea and the craggy old crone of Gaelic myth who seems to share these important mountain-loving and oracular attributes. We have no definite archaeological evidence pointing to the worship of Cybele or Rhea in Roman Britain, and the fact that the ‘Cailleach’ mythology comes from lands which largely fell outside of Rome’s direct cultural influence suggests that the Cailleach legends possibly evolved in-situ and before the coming of Christianity.

That there was certainly Bacchic/Dionysian and Mithraic cult practised among the Roman-Britons: we can be certain of this from archaeology, but there was no evidence of Cybele, which was apparently a city-cult at Rome. Instead, the closest ‘maternal’ divinities we come across are those known as the Matres or Nutrices – typically represented as a trio of seated women variously nursing or holding bowls or cornucopias. A number of stelae or carved stone panels depicting them survive, and they were also a feature seen in other Romanised Celtic provinces of Europe – perhaps bought to Britain by auxiliary troops serving in the legions.

A Romano-Gallic ‘matres’ statue from Germany. 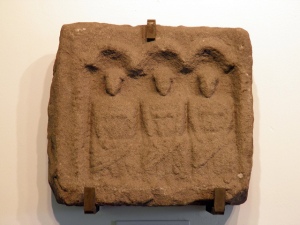 The same as depicted on a stela from the Roman fort at Housesteads, GB.

Apart from their seated pose, they have little else in common with the iconography of Cybele. However, the ‘Celtic Triplicity’ of their form must be considered to be a significant North European religious element. This idea (seemingly copied into Christianity) held that gods had three aspects, and were often depicted ‘3-in-1’. However these triune females still don’t on the surface exhibit any relation to the Cailleach myths from un-Romanised areas of Britain and Ireland.

It is possible, one might suppose, that mythology may have diffused out into these ‘peripheral’ areas and taken root, but it is much more likely that the Cailleach legends evolved in-situ rather than being introduced by continental legionaries. What seems more likely is that the Cailleach mythology formed under the same empirical pre-Roman, pre-Hellenic religious worldview that underpinned the origins of Cybele in Thracia and Phrygia – a worldview that significantly preceded the European Iron Age. This may have had its roots way back in the pre-metal ages when evidence of a widespread religious ideology begins to be demonstrated in the remains of stone and wood temple structures and burial sites with structural commonalities that occur in the archaeological record across Europe. Alternatively, the origins of metalworking in Asia Minor in the Chalcolithic period (c.4000 BC onwards) may have brought the goddess with this technological culture… The connection of Irish and Manx Cailleach legends to those of Cuillean the Smith (Weland to the northeastern Europeans) may indicate this to be true.

One thought on “The ‘Great Mother’ – Cybele, Rhea and the Cailleach”