Plato, speaking in ca.360BCE of a supposedly historic lost western island-civilisation he called ‘Atlantis’, placed the worship of their founder, the Greek sea god Poseidon (Neptune to the Romans), at the centre of this culture. His accounts have no historical or geographical merit, except that they talk of a potent civilisation of united kingdoms founded on a shared spiritual vision, existing beyond the ‘Pillars of Herakles’. Setting aside the contemporary ‘Clash of the Titans’ style Ancient Greek colouring of Plato’s telling (he was seeking to link the supposed glory of Atlantis with his own state of Athens), the geographically-closest essential match we can find that has any kind of vague archaeological symmetry with Plato’s fable is that of the Atlantic European civilisation of the Neolithic and Bronze Age, which placed its imprint on the landscape from Portugal up to Scandinavia. In Plato’s day it would have been inconceivable to Athenians that the legend of Atlantis might relate to the culture of those hairy uncouth illiterate barbarians to the North and West!

Many modern scholars have dismissed the discussion of Atlantis in the dialogues of Critias and Timaeus as pure invention, devoid of anything but metaphysical truths and object lessons. After all, there is no geographical evidence of such a place as Atlantis, and the theories relating to cataclysmic Mediterranean volcanic eruptions do not fit with the Atlantic specification of the Platonic tale. In fact, the same criticism might be levelled at any other oral tradition handed down, and Plato admits that it is an oral tradition he is conveying. The codification of truth in oral tradition is in fact a more complex discipline to understand, and none of the academic rejections of the historicity of Plato’s Atlantis fable argue from the point of view of this discipline.

I have already discussed in previous blog entries how there is a legendary association between the sea and the world of the dead in many Atlantic European traditions, and how the disappearance of the sun into the ocean in the west and its rising again in the land to the East has probably influenced the fundamental belief in reincarnation as mentioned by 2000 year old Roman and Greek sources about Atlantic European religion, and supported by elements in later local folklore. The idea of a key ‘Sea God’ (rather than an Olympian or Semitic mountain god) is therefore a potent one that must be one of the ‘truths’ woven into Plato’s Atlantis oral tradition. We shall therefore examine this Atlantic ‘Sea God’ in greater detail:

The most definite character surviving in the pagan legends from before the invasion of the Roman and Middle Eastern Religions (Christianity, Catharism, Judaism, Islam) is that of Manannán mac Lir, who is remembered in the legends of Ireland, Wales (as Manawydan fab Lir), Scotland and the Isle of Man (where he is still is portrayed as the principle ancestor-god!). His extent or identity is therefore limited to the ‘Celtic’ Northwest of Europe – the chief god of the more eastern Scandinavian peoples, appears from medieval literary sources to have been Óðinn (Odin), who was known to the more southerly Germanic peoples as Woden or Wodan, and does not appear on superficial inspection of the evidence to have a particular connection with the oceans – moreso the wilds and forests of the East. I shall examine the truth (or otherwise) of this later.

Manannán is represented in the various ancient Irish tales as a Lord of the Otherworld with connections to the sea, as can be expected from an Atlantic theology. This is most strong in the aforementioned Voyage of Bran, and in the Ulster Cycle tale of Serglige Con Culainn (The Sickbed/Wasting Sickness of Cú Chulainn) he is again portrayed as the Lord of Mag Mell. Where he appears in Irish tales, it is usually as otherworld Lord and donor of magical gifts and appears to share an identity with many of the characters of Irish literary legend such as the Dagda, Elatha, Ogma, Lugh and of Aengus Óg (who may represent his youthful aspect). Christian tellers of tales and scribal authors in the middle ages appear to have used the Greco-Roman style of the ‘exploded pantheon’ to explain Irish pagan history, which folklore evidence seems at somewhat at odds with. A prime example of the obfuscation of Manannan comes from his identity as it evolved in the Isle of Man:

In the Isle of Man, folk tradition (including an old ballad possibly dating back to 1507, called Mannanan Beg Mac y Leirr) hales him as the proto-ancestor of the Manx to whom they once paid homage by an annual tithe, still enacted nowadays as part of the annual midsummer Tynwald festival. Manx ideas about Manannan echo medieval Irish descriptions (eg – Cormac’s Glossary) which portray him in a ‘euhemerised’ fashion as a great seafarer/pirate/magician who once resided in and ruled over the Island. To the Manx he appears to have taken the mantle of a Mountain God who lived atop the great fortress hill of South Barrule – more akin to Jehovah than a sea lord, possibly the result of attempts by local Christian clergy and laity to portray him as an earthly alternative to the more feminine land-goddess apparently once venerated by Atlantic pagans! (George MacQuarrie’s ‘Waves of Manannan’ is worth a read as he expands this theory). The Manx Manannan is definitely at odds with the otherworldy one of ancient Irish legends, and the absence of many land features in the Isle of Man named after him, compared to those named after the pagan goddess give testament to this. However this does not detract from the fact that many Manx people today will reply ‘Manannan’ when you ask who the god of the Island is! What other European nation still has a popular pagan god? 😉 There is even a fisherman’s prayer to Manannan that was collected by folklorist Sophia Morrison and published in Volume 1 of the Proceedings of the Isle of Man Natural History and Antiquarian Society (1906-1915):

who blessed the Island,

Bless us and our boats,

Good going out, and better coming in,

With live and with dead in the boat.”

Although echoing a similar prayer to St Patrick it stands alone as an example of pagan or perhaps nationalist devotion, Morrison claimed it to be from a Peel (the island’s western fishing port) woman who was nearly 100 years old who had claimed it to have been used by her grandfather! Note the Manx use of ‘Mannan’ or ‘Mannin’ is interchangeable with ‘Manannan’, ‘Mannin’ being the name of the Island which was supposed to have been named after the God. Some Norwegian fishermen were still apparently offering up prayers to ‘Njor the Merman’* during the 18th and 19th centuries – a late reference to belief in the Vanir god Njörðr and evidence that people in dangerous marginal professions spread their luck among many baskets, and don’t place their faith in the usual socially-accepted agencies. (*Collected by Halldar O. Opedal in Odda, Hordaland, Norway during the 19thC – related by Georges Dumézil in ‘Gods of the Ancient Northmen’, 1973). 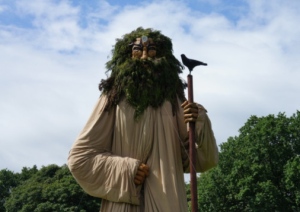 A contemporary Manx sculpture of Manannan

Njörðr is possibly the same deity as the ‘Nerthus’ mentioned by the Roman historian Tacitus (responsible for the second or third-hand literary account of the defeat of the Druids on the Island of Mona in the 1stC AD) –  Njörð is pronounced ‘Nyerth’ or ‘Nerth’. Tacitus’ Nerthus is described as a goddess of the Atlantic or Baltic Germanic tribes, whose cult image was annually taken from its sea-island sanctuary in procession among the peoples on a wain drawn by heifers during a certain festival period at which iron objects were locked away and no warfare was carried out. At the end of this according to Tacitus’ (again, second or third-hand account), the wain and the image of the goddess was immersed in a lake and its male attendants died.  Jörð was the feminised portrayal of the Earth (it is the origin of that word in English) in later Germanic and Scandinavian legends – Tacitus refers to Nerthus as ‘Terram matrem’ (mother earth).

Njörðr has a reasonably strong legendary association with the sea and was said (in the Prose Edda text Gylfaginning) to live in a heavenly place called Nóatún, meaning ‘ship enclosure’. In the Poetic Edda  poem Vafþrúðnismál, it is stated that he will survive Raganorok and be reunited with the Vanir, suggesting an afterlife existence in the Scandinavian religious schema. He is associated with wealth, fertility, benignity – much like his son Freyr – and in one tale he was married to the mountain giantess Skaði – a daughter of the jötunn (giant) Þjazi whose attributes included the ability to take the shape of giant eagle. (Skaði and Njörðr’s daughter Freyja’s feathered cloak appears in other tales and gives the ability to shape-shift into the form of a bird!). After the Aesir kill her father, Skaði is allowed to choose Njörðr as a husband, apparently deciding on account of his beautiful feet (presumably being a sea-loving god they are clean and smooth), but they disagree about their favourite place to live –  Njörð wishes to stay near to the sea and Skaði longs for her father’s mountainous province of Þrymheimr.

In the Poetic and Prose Eddas, Njörðr is recorded as being the father of the male and female twins Freyr and Freya (literally ‘Lord’ and ‘Lady’) – described as leaders of the race of gods known as ‘Vanir’, who originate in ‘Vanaheim’. Although it is never stated that Skaði is their mother, it is strongly implied. As we shall explore later, the theme of an estranged otherworld sea-god and his female earthly-mountainous consort was a key theme in Atlantic Paganism further West, and the Vanir tradition of Scandinavian paganism ultimately derives from this.

In the Lokasenna poem of the ‘Poetic Edda’ texts, Loki states that Njörðr came to live as a hostage among the Aesir race of gods from the west (stanza 34) after the first ‘Aesir-Vanir War’ (an account of which occurs in the Völuspá). The mixing of the ‘Aesir’ and ‘Vanir’ in Norse legends is a curious aspect of late Scandinavian Atlantic Paganism, and we need to consider how their ‘Sea God’ Njörðr relates to Manannán Mac Lir. Are they the related to the gods of the Western Atlanteans? I’ll do this in another post to follow….