The Welsh answer to England’s ‘Robin Hood’ legend is that of ‘Twm Siôn Cati’ (pron. ‘Toum Shon Catti’), whose legend has in modern times been popularly located (like that of Scotland’s Sawney Bean and Ireland’s Caher Roe) in the fractious 16th century during the period of unrest following the Protestant Reformation. Modern authors have attempted to give historicity to the character, giving him an air of political legitimacy, not in the least because – unlike Sawney – Twm was a ‘good fellow’.

The usual modern tale told of the euhemerised ‘historical Twm’  is that he was born Thomas Jones, illegitimate son of Catherine ‘Cati’ Jones of Tregaron and the more regally connected Siôn ap Dafydd ap Madog ap Hywel ‘Moetheu’ (?Matthew) of Porth-y-Ffin (also described as ‘John Wynne of Gwydir’ in some texts), circa 1530. Why this has come to be so often-repeated is solely due to the desire to fix ‘Twm’ with a provenance, either (as in the case of Robin Hood) out of civic pride or to suit the romantic prejudices of authors with theories on the subject, of which there have been a not inconsiderable number. The modern tale seemingly derives from ‘The Adventures and Vagaries of Twm Shon Catti’ by patriotic Welsh romanticist-antiquarian T J Llewelyn Prichard (Pub. Cox, Aberystwyth 1828) and has been enlarged upon to form the current ‘tourist’ myth. However, like with ‘Sawney Bean’ its origins as historical are in dispute: For instance, a play ‘Twm Shon Catty, or, The Welsh Rob Roy’ reviewed in the 1823 edition of the ‘The Drama‘ magazine places Twm as a knight and lord during the reign of Henry IV (d.1413). Evidently, the desire to establish provenance in the confused political landscape following the reformation was again to blame for the metamorphosis of the popular narrative. Thomas Pennant noted in his ‘A Tour in Wales, 1770’ (Vol.2 p.137) that the legend of outlawry associated with the seat of the influential 16thC Wynnes of Gwydir was ascribed to an earlier character, Hoel ap Evan ap Rhys Gethin. The historic Thomas Jones (Hoel’s later ancestor) does not get a mention by Pennant, who evidently had access to Welsh pedigrees when writing this work, again pushing the legend back over the medieval ‘event horizon’ and therefore into the world of legendary historical fantasy where kingship was believed derived either from god, or the blessings of fairies, or both, and sleeping saviours would return to fight the usurpers of the land. This was, of course, the world of the early 15thC and the rebellion of Owain Glyndŵr against English hegemony – a time when Welsh monarchs and gentry became ‘outlaws’ and ‘bandits’ in English polemic tradition. Curiously, the legendary exploits of Twm and Owain seem similar.

The flesh of Twm’s legendary narrative portrays him – like Robin Hood – as a nobleman or popular yeoman-class commoner being consigned to outlawry by malice, misfortune or turn of politics. His outlawry, although  overtly criminal, is tacitly for the common good, and his clever japes, tricks and skillful demonstrations of feats keep him one step ahead of both death and the law. Like in the other ‘outlaw’ myths he inhabits a cave in the wilderness with a female partner where he conducts his heroics (or crimes) until eventually re-entering society to claim his deserved rewards. He therefore fits the character of the ‘legendary wildman’ whose guise in British and Irish folklore frequently crosses over with that of giants in a number of legends (for example, Wade and his wife from Eskdale in North Yorkshire, the Cailleach and her husband from Scotland, Mann and Ireland).

Twm’s supposed cave (‘Ystafell Twm Siôn Cati’) is a popular haunt of tourists seeking after his legend, and is to be found on Dinas Hill on the RSPB Gwenffrwd-Dinas Reserve, near Ystradffin in upper Carmarthenshire, not far from Llandovery. The hill and cave overlooks the confluence of the rivers Towy (Tywi) and Pysgotwr, so in the Atlantic system of paganism before the Christian era, would undoubtedly have had great significance, the River Towy being one of the largest in Wales, being full of the protean and migratory Sea Trout and draining into Carmarthen bay. 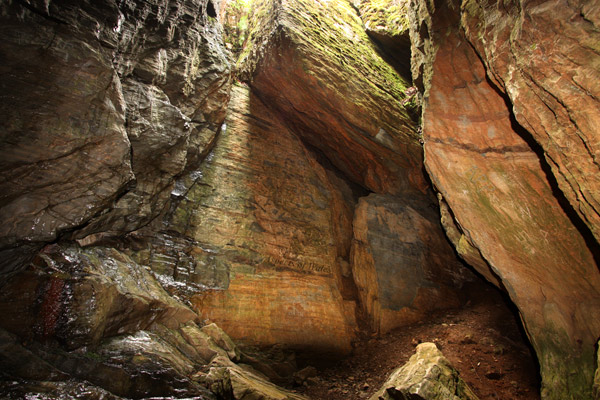 Twm’s ‘cave’? I’ve been there – its more like a grotto than a cave…
Image ©Paul Edwards 2011, http://www.aspectsofwales.co.uk/Twmsioncaticave.htm

Ystradffin and its environs are connected to the Marian cult which supplanted paganism in the middle ages, and the nearby hilltop church of Llanfair-ar-y-bryn (St Mary on the Hill) bears witness to this. This was a region once deemed important enough by the Romans to have built a road and fort there, perhaps marking it as an older hotspot of banditry than the medieval and early-modern ‘Twm’ legends give credit for. It was, after all, the frontier with the last part of southern Britain to have maintained an indigenous Celtic social structure and religion, making it a breeding ground for early Christianity.

This brings us to the name, ‘Twm Siôn Cati’. Obviously it is reasonable to suggest it is an indigenous mode of naming common to the Celtic world and its love of genealogies and foreshortened nick-names – ‘Tom, son of John and Catherine. Let’s analyse the name:

The name ‘Twm’ (Tom) is a Christian name of a legendary early acolyte and proselyte of the Hebrew sage Jesus of Nazareth – Thomas the Twin. Coincidentally Thomas shares his feast day (6th Novemeber) with the Welsh saint Illtyd (Illtud) who was credited with founding one of the first and most vital Christian schools at Llanilltud Fawr (Lantwit Major) during the 6th century. This school has been linked to many of the early Christian missionaries of Britain and Ireland during the sub-Roman period, including Patrick. Thomas the missionary served as a popular saint by which to name children. He is most venerated in Southeast Asia for this reason, and is referred to as the ‘Apostle of the Indians’.

The element Siôn, Sion or Shon is usually supposed to represent the Welsh version of the name ‘John’. However, the phonetic ‘shon’ might also relate to Celtic words for ‘old’ – Welsh=(S)hen, Manx=Shenn, Irish=Sean. It also lies in the phonetic scope of celtic words for ‘blessed’ – Irish= séant, Manx=sheaynt,

Although linked in modern legends to a woman called ‘Catherine’ the name ‘Cati’ has a much more interesting past with distinct links in the insular celtic folklore and legends with both rebel-bandits (Scots/Gaelic: Cathair, giving the Irish bandit-name Caher Roe) and a bevy of mysterious magical females going by the name of Caitlin, Cathaleen etc who gave their names to a number of places, not the least of which is Enniskillen, where Caitlin is believed to have once have been a pagan goddess with a sanctuary on the island there. ‘Cathaleen’ is the the female temptress overcome in legends about St Kevin of Glendalough on a lakeside crag (for more information on her, see my other posts on the matter).

This interpretation might imply that legendary Old Twm, the helpful outlaw, was originally believed to have been the son of ‘Cati’, the ‘sitting one’ who presided over ancient shrines on crags overlooking water…