The Belgae (originators of the name of the modern country of Belgium) were a fascinating and influential ethnic-cultural group of tribes with a dominant political and ideological presence among northern Europe’s ‘Celtic’ peoples before and after Romanisation, in the period spanning the 2ndC BCE to the 4thC CE. Their territories at the time of Julius Caesar’s Gallic conquest extended in an area covering roughly the lands between the Seine and the mouth of the Rhine – parts of modern day France, Belgium, the Netherlands and Germany. In Book 5, Chapter 12 of his Comentarii de Bello Gallico, Caesar states that the southeastern British tribes were ruled by descendants of the Belgae, explaining the fact that Belgic tribal names were found in Britain, for instance the Atrebates, and even the Menapii who were recorded in Ireland by 2ndC CE by Greco-Egyptian geographer Ptolemy as the Manapi and from whom Co. Fermanagh is possibly named, possibly even also the Isle of Man (once known as Menapia/Monavia):

The interior portion of Britain is inhabited by those of whom they say that it is handed down by tradition that they were born in the island itself: the maritime portion by those who had passed over from the country of the Belgae for the purpose of plunder and making war; almost all of whom are called by the names of those states from which being sprung they went thither, and having waged war, continued there and began to cultivate the lands. The number of the people is countless, and their buildings exceedingly numerous, for the most part very like those of the Gauls: the number of cattle is great. They use either brass or iron rings, determined at a certain weight, as their money. (trans. W. A. McDevitte and W. S. Bohn.)

Caesar states that the Belgae, in particular the western branch known as Bellovaci, were of a particularly fearsome and unsympathetic nature in regard to the Romans. Indeed, their resistance played an important part in the final stages of his conquest of northern Gaul, when they formed an alliance with both the British and Armorican tribes, whose cross-channel neighbours were again ‘Belgae’, according to Ptolemy. Influential 20thC Irish scholar T.F. O’Rahilly even suggested that the Fir Bolg mentioned in the Lebor Gabála Érenn might be a branch of this widely-spread Iron Age ‘tribal group’ supplanted by Goidelic peoples from Spain in the 1stC BCE. It appears that the ‘Belgae’ were an influential bunch!

In assessing the origins of tribes calling themselves ‘Belgae’, however, there is an important cultural movement among Iron Age Europeans that needs to be examined. This hinges on the events in the immediate aftermath of the death of Alexander The Great, perhaps also triggered by displacements caused by tribal movements from northern Europe. The culmination of this was the (infamous if you were Greek) events of 279BCE, which saw an invasion by a federation of massed Gaulish war-bands through the Balkans and the homelands of the Macedonian-Greek Empire of Alexander, penetrating right down into the Greek and Anatolian heartlands. This movement appears to have had a fundamental impact upon the warrior-culture of western Europe’s Celtic elites who absorbed the iconography of deified Alexander as Apollo, Mars/Ares and Ammon/Zeus/Jupiter and spread it back into NW Europe, famously represented in their magnificent coinage. The leaders and heroes of this famous invasion included the theophorically named Bolgios, who – as far as we know – survived the campaign and would have had sufficient prestige to then rule as a tribal dynast. The Gaulish tribe known as the Volcae-Tectosages were one of several whose creation appears to have resulted from this pan-Gallic enterprise, and who returned to the Gaulish homelands in the west, so it is possible that the Belgae might have been another cultural group or part of a Pan-Gallic movement who participated in this great warrior event. The names Volcae and Belgae/Bolgae in fact appear to be synonyms or variants of the same tribal designation, incorporating the name of the Pan-European god Belenos or Volos/Veles/Velnias who appears to have shared the same solar-martial aspects as the deified (at least by the Celts) Macedonian Warrior-King who conquered most of the known world… The Romans and Greeks would hereafter comment upon a fanatical, boastful and decapitation-obsessed faction when talking about Celtic barbarians – something akin to the modern Sunni Muslim ISIS/ISIL and Al-Qaeda movements. 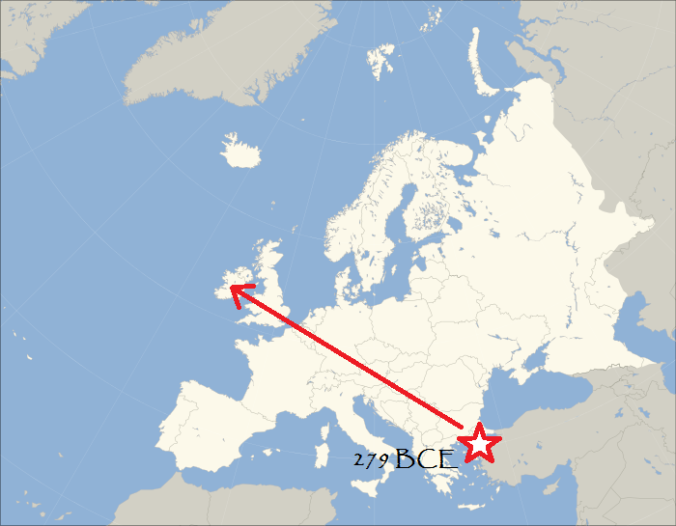 From Galatia to Galway: The NW thrust of ‘Belgic’ culture after 279.

By Caesar’s time (1stC BCE), he was able to identify separate Belgae and Volcae, the latter being placed in the Hercynian forest, as well as Gallia Narbonensis (the Volcae Tectosages and Volcae Arecomici):

“… And there was formerly a time when the Gauls excelled the Germans in prowess, and waged war on them offensively, and, on account of the great number of their people and the insufficiency of their land, sent colonies over the Rhine. Accordingly, the Volcae Tectosages, seized on those parts of Germany which are the most fruitful around the Hercynian forest, (which, I perceive, was known by report to Eratosthenes and some other Greeks, and which they call Orcynia), and settled there. Which nation to this time retains its position in those settlements, and has a very high character for justice and military merit; now also they continue in the same scarcity, indigence, hardihood, as the Germans, and use the same food and dress.. ” Comentarii de Bellum Gallicum, Book 6.

The Hercynian forest described by Caesar stretched from the lands of the Helvetii, eastward along the Danube into Dacia and Pannonia – modern Romania. This was a kind of Roman mental ‘event horizon’ which they failed to gather the will to cross after a history of disastrous military campaigns, resulting in the development of something of a ‘pseudo-ethnicity’ of ‘Germanii’ to describe the peoples living beyond it, even though contemporary sources such as Posidonius considered tribes such as the Boii (whose homelands included parts of Germania as far as the Baltic) to be ‘Celts’ – a belief supported by archaeological evidence. I might also add my own observations on the aspects of the Celtic solar war-god, Belenos, found in later Germanic, Slavic and Baltic cultures…

In short, my theory is this: The ‘Belgae’ were a manifestation of a cultural-religious movement that was an expression of the Celtic ‘war-band’ culture which sought the glory of Alexander and Delphic Apollo (who they identified with their main god, Belenos) and invaded and settled in Greece and Anatolia in the 3rdC BCE. This internationalist and warrior-centric culture transcended local ethnicity and introduced a fundamental ideological change among the Celtic/Germanic peoples of NW Europe which subsequently influenced their religious, military and philosophical outlook and had great influence upon their mercantile and numismatic culture. ‘Bel’, ‘Vel’ or ‘Belenos’ was the god most venerated in this culture who gave his name to this cultural movement which spread from Greece and the Balkans, up through the La Tene heartlands, up the Rhine and into Britain and Ireland over the next 4 centuries….

This ‘southeast-northwest cultural corridor’ of influence appears to have been the fostering ground of both religious and secular power in the post-Roman era, as the Belgic territories of the Suessiones (focussed on modern Soissons) eventually became a heartland of the Germanic Frankish kingdoms, the Christianisation of which Irish missionaries were to play such an important role in, sowing the seeds of the superb Carolingian Empire and thus medieval European Christendom…

The Belgae were possibly the main reason that Julius Caesar and the subsequent Roman Emperors invaded northern Europe. They were promoters of a religious system which was fanatical: it knew no fear, promised reincarnation and had a distinct warrior-cult which enticed men to challenge the temporal authority of Rome. This movement had (for the Romans at least) a historical root in the humiliating sack of Rome by Brennus of the Senones and his army of Cisalpine Gauls in the 4thC BCE. That this cultural movement extended well into the very much un-Romanised Germania Superior regions where the very ‘Belgic’ (and Thracian) ‘Gundestrup Cauldron’ was discovered must surely make us examine why ‘Germanic’ paganism is not considered similar to the religions of Europe’s Atlantic pagan Celts…

One thought on “Who were the Belgae?”