The Etruscan civilisation which dominated northern Italy until the rise of the Roman republic was responsible for contributing significant additions to the religion of one of the great military and cultural powers of the ancient world. It grew out of the 'Villanovan culture', which was itself an ethnic and cultural offshoot of the proto-'celtic' Urnfield Culture of north/central Europe during the Bronze Age. During the 7thC BCE, like other nations and ethnic groups in the Mediterranean region, it came under increasing cultural influence of the Greeks who were expanding their colonies westward via coastal trade and conquest. 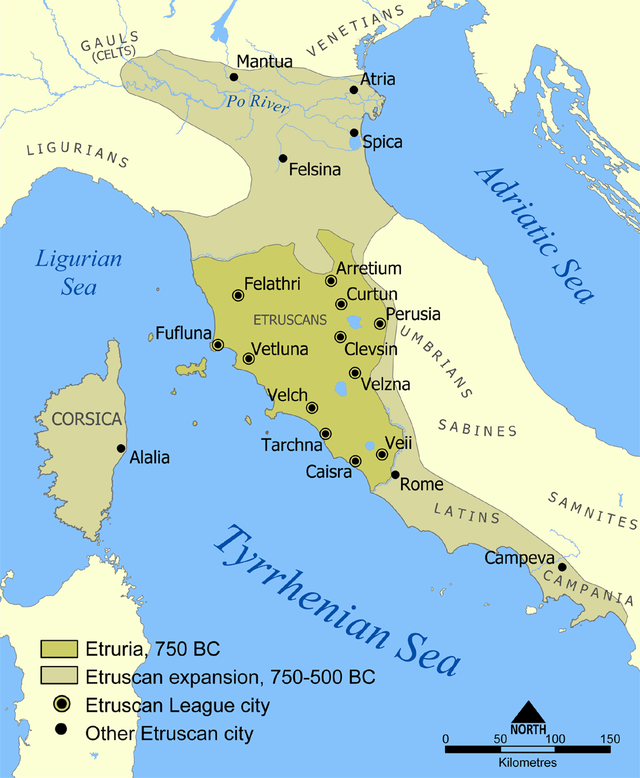 Although borrowing aspects of Greek-style immanent polytheist religion and adopting parts of the Olympic pantheon after the 7thC BCE, the Etruscan religious system maintained aspects of its older religious outlook, which by the time of the Roman Republic became identified in particular with a focus on Augury and Haruspicy – the reading of signs from nature and deriving prophecy from the behaviour (and entrails) of animals, and from natural phenomena such as lightning. The Romans referred to this (and the written texts upon which Romans based their augurial practices) as the Etrusca Disciplina, whose precepts became an important part of their religious life.

This particular aspect of Etruscan faith was indeed important: Etruscans were famed for their dedication to religion and required a professional technical priesthood trained in the disciplines of astronomy, natural philosophy (scientia), meteorology, zoology and the gods themselves. In this manner, they appear to have had similarities to the religious specialists among the Gauls and Britons, known to Greeks and Romans as Druids. Like the druids, the Etruscan priesthood were trained in colleges, the most notable late classical example being that opened by the Emperor Claudius in 1stC CE. The powerful influence of this religious system caused it to become the founding model for what would become Roman religious culture, and it therefore unsurprising that Etruscan religion appears to have had a fairly extensive pantheon of gods, albeit that Etruscan culture was formed from autonomous city states, each with their own interpretation of religious practices. These gods seem to have represented a system of immanent polytheism in which all natural phenomena were ascribed a divinity to represent them. However, the Etruscan religious system had three principal gods, named Tinia, Juni and Cel (later supplanted my Menrva). Tinia or Tin was the chief god, Juni his feminine counterpart, and Cel was the 'Earth Mother', perhaps responsible for the subterranean realms (her name evoking tombs and caves – cella). These seem to have evolved into the Roman 'Capitoline Triad' of Jupiter, Juno and Minerva. Under the influence of Greek and other Italic gods, the number of these diversified. However, the art of Augury and Haruspicy was apparently the principle feature of the religion by which the gods' wills were interpreted – Etruscans were natural philosophers par excellence.

Another feature of Etruscan religion which is notable is the fact that it was, by tradition, a revealed faith. The story of this was recounted in 44BCE by Roman author Cicero (De divinatione Book 2; 50-51.23):

“…It is said that, once upon a time, in the countryside of Tarquinii, while the earth was being plowed, a rather deep furrow was dug and suddenly Tages sprang forth and spoke to the man plowing. Now this Tages, according to the books of the Etruscans, is said to have had the appearance of a child, but the wisdom of an elder. When the rustic had gaped at his appearance and had raised a great cry in astonishment, a crowd gathered in a short time, all Etruria assembled at that place. Then he said many things to his numerous listeners, who received all of his words and entrusted them to writing. His whole address was about what is comprised by the discipline of soothsaying (haruspicinae disciplina). Later, as new things were learned and made to refer to those same principles, the discipline grew. We received these things from (the Etruscans) themselves, they preserve these writings, they hold them (as) the source for the discipline…” (Translation: Loeb Classical Library edition)

This tradition has several interesting aspects: Tages was obviously no earthly prophet, but was born from the furrow in a field in a rustic district. This would make him a child of the Etruscan goddess Cel, but also portrays the origins of Etruscan religion as being very indigenous and tied to the ancestral lands of their people. Cicero's account has the peasant gaping in incomprehending wonder while the educated 'townies' write the tiny prophet's words down, suggesting that Etruscan religion was based upon (now lost) canonical texts. Of course, this tale has all the hallmarks of a rustic religion sophisticated by the urbanisation of power in the Italic peninsula during the Iron Age, a process influenced and accelerated by the wealth of the land and commerce with the Greek and Anatolian states. Tarquinii/Tarquinia, founded by the legendary king Tarchon was one of the homelands of Etruscan culture, and therefore 'Tages' (Tarchies – the Etruscan language had no 'g' sound) may well be related as a demoted founder-god.

The Etruscan priest-seers are usually represented in Etruscan and Roman art as holding a stave or 'crook' known as a Lituus. This is sometimes depicted as a trumpet very similar to a Gaulish 'Carnyx' – straight with a curved tip. The lituus stave became the model for the Christian bishop's crozier, but its original form is mysterious. It may possibly have been a tool for assisting in the mapping or measurement of the night sky.

Roman Emperors were proud of their Etruscan heritage. This coin depicts the ritual artifacts of an Augur, including the Etruscan 'lituus'. Similar depictions also include a basin instead of the jug, suggesting the use of liquid 'mirrors' in the scrying process...

Etruscan cosmology appears to have been quite concerned about the importance of boundaries and divisions in the proper order of things. This probably represented a technical aspect of the need to assign signs and portents based upon where in nature they occurred. For this reason, Roman authors tell us that Etruscan religious teachings state that the gods were ascribed to 16 separate regions in the heavens, and that there were 8 (or 12) great eras of Etruscan history (seculae) the last of which was contemporary to them. The established limits and barriers which organised the Etruscan city-states and the rich agricultural land upon which their civilisation thrived were also of key importance. An account of the Etruscan 'Prophecy of Vegoia' preserved in a Roman treatise on land management known as ‘Corpus agrimensorum Romanorum’ (preserved in a 6thC mss collection) says this about the importance of physical land barriers:

“… Know that the sea was separated from the sky. But when Jupiter claimed the land of Aetruria for himself, he established and ordered that the fields be measured and the croplands delimited. Knowing the greed of men and their lust for land, he wanted everything proper concerning boundaries. And at some time, around the end of the eighth saeculum, someone will violate them on account of greed by means of evil trickery and will touch them and move them [….]. But whoever shall have touched and moved them, increasing his own property and diminishing that of another, on account of his crime he will be damned by the gods. If slaves should do it, there will be a change for the worse in status. But if the deed is sone with the master's consent, very quickly the master will be uprooted and all of his family will perish. The ones who move [the boundaries] will be afflicted by the worst diseases and wounds, and they will feel a weakness in their limbs. Then also the earth will be moved by storms and whirlwinds with frequent destruction, crops will often be injured and will be knocked down by rain and hail, they will perish in the summer heat, they will be felled by mildew. There will be much dissension among people. Know that these things will be done when such crimes are committed. Wherefore be not false or double-tongued. Keep this teaching in your heart…” (Translation quoted from 'The Religion of the Etruscans' Ed. Nancy Thomson de Grummond, Erika Simon; Pub. University of Texas Press 2009)

The Romans obviously took this heart as their annual festivals of the Liminalia and Robigalia seemed designed to celebrate the spirit of this traditional Etruscan prophecy. Vegoia was a female divinity similar to Tages who was quoted in the lost texts of the Etrusca Disciplina. Presumably this prophecy was originally a part of the corpus!

Another important aspect of the Etruscan religion which was followed by Roman religion was the belief in spirits of the dead travelling to and occupying a 'cthonic' or underground location. The cultus of the gods who looked after such realms in Mediterranean pagan cultures were actually deeply rooted to the source of their wealth and success (in both trade and warfare): organised agriculture. This is because of the cycle of death being strongly linked in nature to that of renewal: that which decays fertilises new growth. The ancient domestic ancestral cults linked the presence of the spirits of the departed ancestors with success in the temporal world.

Similar ideas were held by the Greeks and the Celts or barbarians of the 'Atlantic' north. However, one must be careful in how one interprets the idea of the spirits of the dead living in an 'underground' realm: Evidence from all of these cultures seems to suggest that this realm also had a reflected parallel existence to our own, and was also connected to the visible heavens and the concept of the far islands and shores of the world-river, called Okeanos by the Greeks…