One curiosity of Atlantic European Christianity is the existence in its collegium of venerated ‘saints’ of a figure with no earthly beginnings whatsoever: St. Michael the Archangel.

Saint Michael the Satan-slayer, as depicted by Raphael.

As the Taxiarch of the heavenly battle host, he occurs firstly in the Darnel-induced visions of the Hebrew Book of Daniel (Daniel 10, to be precise, where he reassures the Hebrews that they as a nation will be protected from the depredations of their Persian captors):

“…Then I lifted up mine eyes, and looked, and behold a certain man clothed in linen, whose loins were girded with fine gold of Uphaz: His body also was like the beryl, and his face as the appearance of lightning, and his eyes as lamps of fire, and his arms and his feet like in colour to polished brass, and the voice of his words like the voice of a multitude…” (KJV)

Michael appears again in the equally hallucinogenic Christian Book of Revelation written by John of Patmos, and leads the War in Heaven.

“…And there was war in heaven: Michael and his angels fought against the dragon…”

It is obvious that in the late -classical period such a character would have had a certain appeal to Central and Northern Europe’s newly Christianised warrior-cultures who venerated their departed heroes religiously, and had complex story traditions recounting their deeds. If you believe St Patrick, the Irish worshipped ‘Idola’ – visions or images – and from the designs of Celtic coins, it is quite possible that Celtic religion was something of a visionary cult.

The idea of a winged, victorious warrior is by no means an invention of the Hebrews, however. The older Egyptian and Babylonian Empires were responsible for this cultural iconography which entered the western Mediterranean sphere during the Hellenistic period, from where it eventually spread into the ‘barbarian’ world of Europe’s Celts.

During the period of Roman expansion into the lands of the Danubian and Rhineland Celts, and thereafter into Gaul and Britannia, the coins of the Celtic kings began to pick up on the iconography of the ‘winged’ human or animal form. In particular, this can be seen in those produced by the Belgic cultures – in particular the Atrebates, Trinovantes and Catuvellauni of eastern Britain during the 1stC BCE and 1stC CE who played such a major role in the Romanisation of Britain and northern Gaul. Of particular note are the coins of Commius, Cassivellaunus, Addedomarus, Tincomarus, Tasciovanus and his son Cunobelinus, which all show signs of Roman acculturation through their use of visual motifs such as the use of imagery of Pegasus,  the winged Victoria, and the Eleusinian head of Corn. In so doing, they were copying the iconography that their sons had become accustomed to while in fosterage/hostagery in the Roman curia.

Winged icons of shining deities would find their true Renaissance in the coming Christian era, when angels as warriors of light would replace the icon of the mercurial shining warrior god so beloved of the Celts.

The appearance of places named after ‘Michael’ was already well under way by the early middle ages: In Ireland, the early southern monastic island settlement of Skellig Michael was a key place in this process. St Michaels’ Mount in Cornwall and Mont St Michel in Brittany were another two significant places with religious importance. Diodorus of Sicily, writing in the 1stC CE referred to the metal-mining and smelting heartland of Cornwall by the name Belerion, suggesting a theophoric name based on Belen(os):

“…The inhabitants of that part of Britain which is called Belerion are very fond of strangers and from their intercourse with foreign merchants are civilised in their manner of life. They prepare the tin, working very carefully the earth in which it is produced. The ground is rocky but it contains earthy veins, the produce of which is ground down, smelted and purified. They beat the metal into masses shaped like astralgi and carry it off to a certain island off Britain called Ictis…”

Ictis is believed to refer to St Michael’s Mount near Marazion.

Further to the northwest, another important metal-producing place was the Isle of Man (called Manavia Insula by Ptolemy in the 2ndC CE). Here the concept of the  ‘Angel Michael’ was – as elsewhere – introduced into the popular imagination by Christian monks and priests. To the Manx, the name was converted to ‘Vaayl’. The ‘v’ sound could represent a transition from a name starting with ‘b’ or ‘m’ in the Celtic languages. This makes us consider if the original name was in fact ‘Mel’ or ‘Bel’… The name of this Island’s prime saint, ‘Maughold’, is a version of ‘Mayl’ (referred to as ‘Mel’ in the Brigitine hagiographies). The 12thC hagiographer Jocelyn of Furness told a legend of St Patrick defeating a flying wizard called ‘Melinus’ on the Isle of Man. ‘Melyn’ is the Welsh word for ‘yellow’, and sounds something like the Latin word ‘Malin’, referring to the tide. ‘Creg Malin’ in the Isle of Man overlooks St Patrick’s Isle where Jocelyn probably portrayed his imaginary showdown between christianity and the crusty Simon-Magus imitating wizard. This legend of Melinus actually equates directly to the Manx traditions of Manannan, who they claimed was the original ruler overtunrned by Patrick.  The 18thC English writer George Waldron commented that he had been told that ‘Merlin’ was said to be the legendary wizard-ruler, echoing Jocelyn, albeit with an extra ‘r’ and it is to be noted that ‘Merlin’ and ‘Mercury’ are not too dissimilar as names... the plot thickens!

So, Merlin, ‘Melin’ and ‘Belin’ are linguistically not too far from each other. Also, the tendency of Celtic languages to switch the P/B (‘P-Celtic’) sound with the C/K/Q (‘Q-Celtic’) sound make an association of ‘Belen(us)’ with the legendary ‘Cuillean’ a distinct possibility.

‘Cuillean’ was a legendary Irish/Manx smith and metal-smelter who occurs in the legends and placename-lore of Ireland, Mann and Scotland. If we are to link this character to ‘Belenus’ then it is worth noticing the names ‘Cunobelenus’ and ‘Cuchullain’ are exactly equivalent. Also the ‘germanic’ name of the legendary smith-figure ‘Weland’, with the addition of a Gaelic ‘k’ guttural becomes ‘kWeland’ so is actually an equivalent of ‘Chuillean’, or in the Welsh – ‘Gwyllion’. Slieve Gullion in Armagh, Ireland, and Slieu Whallian and Ard Whallan in the Isle of Man are name after him – possibly also ‘Schiehallion’ in Scotland. All of these places have interesting legends attached to them. Ireland also has its share of ‘giant’ or saint-stories with the name ‘Mal’ or ‘Mel’ attached – Mal Bay in County Clare being an example that comes to mind.

So… Belenus is the same ‘person’ as the smith/wright/craftsman Cuillean/Wayland?   The association of Belenus with Mercury, Mars and Apollo in the Romano-Celtic world has a direct relationship with his identity as a craftsman. Like his various hypostases – Lugus among the continental Celts, and Lleu Llaw Gyffes and Manawydan fab Lir in the Mabinogion, he is a maker of things (shoes – like the Irish Leprachaun) – a forger with the fire of the sun and spiritual ‘fire’ of the Otherworld…

Going back to those famous Belgic rulers of ancient Britain in the 1st centuries BC and CE, an appraisal of their names (as well as their numismatic iconography) shows a deep attraction to the god Belenus. Firstly, and most obviously there is Cunobelenus – the ‘Hound/Wolf of Belenus’. Next the tribe of the Catuvellauni – ‘Seat of Belenus’ and their leader Cassivellaunus (‘Stronghold of Belenus’ – defeated by Caesar in his first invasion). The name of the tribal King Tasciovanus (1stC BCE) also had distinct connections to the name of Celtic ancestor gods that Tacitus cites in his book Germania: Tuisto/Tuisco and Mannus (hence, possibly, ‘Tuisco-Vannus’). All of these are probably related to ‘Beli’ – the bristling, bellicose Sun God of the Celts whose icon was sometimes portrayed as a Boar, the horse with its hair streaming or as the combative rutting ‘Stag-Warrior’: Cernunnos.… In fact, etymologically the word for ‘hair’ in the Indo-European languages has similarity to the word for ‘war’ and ‘beauty’. To use Latin as our example, we have Pillus, Bellum, and Bellus: When considering the imagery of Bellenus as ‘Apollo Grannus’, this relationship becomes quite clear – especially in the context of the aesthetics of a proudly adorned warrior race such as the Celts…. It is no wonder they appropriated the horned image of Alexander as ‘Amon-Ra-Apollo’ which he began to use after liberating Egypt from Persian rule while in his youthful prime.

St Michael the Archangel served as a ‘placeholder’ for the ‘folk-memory’ of this important religious figure of the Celts. 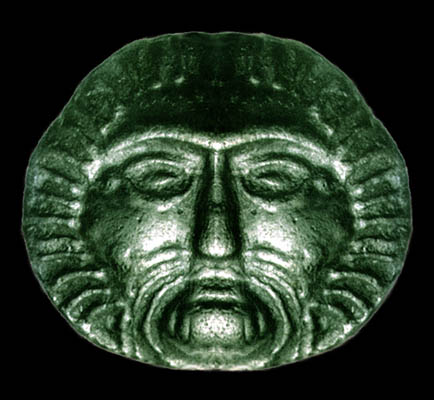 3 thoughts on “Belenos and St Michael the Archangel?”