The word ‘mercurial’, taken from the name of the Roman god Mercury and his eponymous liquid metal, generally means ‘volatile’ and ‘liable to change’. This descriptor is an apt expression of the god’s perceived nature as an ever-busy messenger between the divine and the mundane, the organising principle of trade and travel, inspiration for eloquence, dreams and communication, and a great crosser of boundaries. Known as Hermes to the Greeks (who seem to have donated him to the Romans), he was a god whose function these sage peoples also applied the term daimōn, which persisted in the Latin christian world in the word ‘demon’, coming to mean an evil angel who serves Satan in the mundane realms. Very broadly, a daimōn can be thought of as a penetrating principle of spirit entering into and acting on matter – a god-like being. In Plato’s dialogue known as The Symposium, the philosophers at a wine-drinking party discuss how, because of its great power, the principle of love (and hence, the goddess Aphrodite) is in fact a daimōn, for instance. Hermes and Aphrodite were credited in mythology with coupling to produce the androgynous god Hermaphroditus, venerated in the consumation of marriage as an expression of the combination of male and female sexuality.

In Greek,  ‘herma‘ means ‘pile of stones’, ‘prop’ or ‘boundary marker’, and this was the original form by which the god’s numinous presence was imagined in rural districts during and before the Greek ‘Archaic’ period, when gods were frequently depicted such by simple formless objects (such as the wooden ‘xoana’ images etc). The name ‘Hermes’ also resonates with the later Arabic word Emir, meaning ‘prince’ or ‘commander’ of a territory. From the classical period onwards (after the 7thC BCE) depictions of Greek gods increasingly became more figurative, and the word hermai came to be applied to those monuments associated with Hermes: often assuming the form of a simple square pillar surmounted with a carved head of the god, and exhibiting a phallus on the column at waist height. Greek traveller Pausanias, writing in the 2ndC CE, noted the god’s image might take the form of an erect male member mounted upon a pedestal. Such objects were popularly placed next to doorways and at boundaries in ancient Athens. In many ways they were similar to the older Egyptian depictions of the ithyphallic god Min.

To Classical and Hellenistic era Greeks, the square column represented order and stability (the god’s sacred number was four), and the phallus combined symbolism of both penetration and generation. Students of Greek paganism will recognise the phallic imagery as being shared by gods such as Dionysus, Priapus, and the Satyrs of the Dionysian retinue. Sâthe is another Greek word for ‘phallus’. 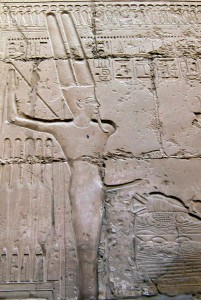 Stela showing Egyptian god Min – an ‘intact’ version of Osiris in the land of the Living?

As Greek religion evolved to incorporate eastern philosophies of essential monism, Hermes increasingly came to represent the divine aspects of the individual – an important factor in the development of christianity. An example of this is the syncretic god-concept of Hermes Trismegistos (‘Thrice-Great Hermes’) whose cult combined with that of Thoth  in Hellenistic Egypt, and who was recognised as a reputed originating author of written religious traditions in the Hellenistic Near East which seem to prefigure christianity in their content (‘Hermeticism’). Both Thoth and Hermes were patrons of written communication, and the Greeks saw the origins of many of their gods in those of ancient Egypt, and also to the converse.

In Roman culture, Hermes came to be identified with Mercury, whose name (and function) is associated with the word for trade – mercare. The god’s function as crosser of boundaries is also represented in the Indo-European languages’ use of variants of the word ‘mark‘, such as the Latin ‘margō‘, which means boundary or border. Trade is, after all, a formalised interface between individuals where both seek to benefit…

As human competitiveness knows no such boundaries, Mercury was also considered the god of magic, tricksters and thieves! In the 4thC CE, Christian writer Arnobius (Adversus Gentes 4.9.1) sneered at the Romans for worshipping their ‘Dii Lucrii’ (‘gods of profit’) of whom Mercury was an obvious case. Rome’s success came from copying the skill in trade of the Greeks and Phoenicians, who had colonised Italy before the city came to prominence. Mercury appears to have been a Greek introduction to Roman religion, with no obvious indigenous equivalent (except the original distinctly agrarian and rustic identity enjoyed by Mars/Quirinus) being known to current scholarship. Julius Caesar’s 1stC BCE comment (Comentarii de Bello Gallico) that the Gauls worshipped Mercury as their chief god was probably an off-hand comment that Gauls worshipped trade and  money – he had certainly managed to buy off the loyalties of many of them in pursuing his conquest of ‘barbarian Gaul. Likewise, the same might be said of Tacitus’ comment a hundred years later that Mercury was the chief god of the German peoples.

The breaking of boundaries and interfaces is also a strong semantic associated with death and travelling to an afterlife, so Hermes and Mercury were ascribed the divine function of psychopomp – guiding departed souls to their allotted destination.  This resonates with the god’s mythological connection with acting as a herdsman, and Hermes was indeed venerated as a protector of flocks and herds – seemingly a more fundamental or primitive aspect of his rôle as guardian of wealth and trade. In the myth of Zeus’ love for Io, tranformed by Hera into a cow, he sends Hermes in the guise of a shepherd to slay the giant Argos Panoptes who watches over her, freeing her to wander the earth.

Throughout the whole body of the text of the ‘Homeric Hymn to Hermes‘ he is portrayed as a rustic god associated with the droving and abduction of cattle and other beasts. Indeed, when he was but a precocious babe in his mother’s arms in a cave high on rustic Mount Cyllene, his first act after birth was steal the cattle of his brother Apollo, and institute the bridge of sacrifice between man and the deathless gods by slaying them. In recompense to his brother, according to the ca. 6th/5thC BCE hymn, he creates Apollo’s mystical lyre from the shell of a tortoise and the horns of an ox.

As a drover of cattle or a drover of souls, he is a leading and conducting force, much in the way that Aphrodite is an inducing and seducing force. He was sometimes imagined and depicted as Hermes Kriophoros – ‘Hermes the Ram Carrier’ – in the manner of a shepherd, carrying the beast in his arms or on his shoulders. This imagery became popular in christianity, whose narrative of shepherding and flocks appears to borrow heavily from the mythology of Hermes. He is almost always depicted (either as Hermes or Mercury) wearing a sun-hat (petasos), this being the signifier of a rustic in Greco-Roman culture: wealth and prosperity of any society ultimately flows from the soil.

A statue of Hermes with his ‘Caduceus’, from (could you have guessed it?) the Vatican museum. Lots of phallic imagery, in spite of the attempts at censorship: Was Hermes eventually seen as the ‘acceptable’ face of Dionysos?

Traditional depictions of Hermes and Mercury usually show him wielding a staff or sceptre. From our understanding of his functions, it can be seen that this could easily represent the staff of the shepherd, the measuring stave or tally stick of a merchant, the wand of a magician, the rod of a scribe or the sceptre representing authority in interaction between people. Known as the ‘caduceus’, its depiction became more formalised as time progressed until it assumed the form we often associate with it: a rod around which two serpents are twined, surmounted by a ball, sometimes with wings attached. The serpents are a symbol of regeneration from the earth, of death and rebirth, and also have sexual connotations as well as being largely ‘hermaphrodite’ in appearance, at least from the point of view that they are difficult to sexually differentiate. The twined serpents imply the coupling of male and female, representing the daimonic universal motivating forces implicit with both Hermes and Aphrodite. The wings and serpents together represent the polar opposites – the cthonic earth upon which snakes are doomed to crawl, and the air or pneuma, which is the sky and home of the stars and spirit. This represents the ability of Hermes to link the divine and the mundane. He was the god of transaction in all its forms and the caduceus is a striking representation of this.